From September 2011, my review of Pike Brewing, Seattle’s famous microbrewery:

You know, its surprising to me that it took me this long to do a review of Pike. Not only is it a great purveyor of spirituous beverages, it is also pretty famous as micro-breweries and craft brewing go. And wouldn’t you know it, it originated in the same market where Starbucks got started. That’d be Pike Place Market, located in the heart of downtown Seattle. It was at the Great Canadian Beer Fest that I first noticed their label and got to try some of their products. I even had the honor of visiting the market where the brewpub is located. And let me tell you, it was pretty cool! Unfortunately, due to our errant social calendar, I did not get to step into the pub, grab a seat and enjoy some samples! Instead, my dear brother-in-law fetched me a six pack later that day, and I eventually found a string of liquor stores back here in BC that carried their products. Thus far, I’ve managed to try three, and since I managed to get my hands on some again recently, I thought I’d give them their due! Here goes… 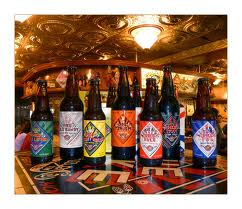 Kiltlifter Ruby Ale: Ordinarily, I find Scotch Ales (that would be beers brewed with single malt scotch) to be a little overpowering. However, this ale, hilariously named, manages to combine a sweet, tawny taste characteristic of scotch ales, with a strong bitter finish. All in all, its a good balance, neither too sweet or too grating. And at 6.5 % alc/vol, its also got a good alcohol content for people not looking to get smashed.

It was a friend (hi Katrina!) who first told me of this and it became a mission to find some! But as we live far apart, we were never able to hold onto our procurements for long (aka. we drank em before we could meet again). Finally, we got together and tilted some bottles. No clothes were shed in the course of it ;). 8.5/10

Naughty Nellie: I made the wise choice of picking some bottles of this up as well when hoarding the Kiltlifter. And in many ways, it is better than its counterpart. Lighter, crisper, and with a more noticeable dry hop finish, the name “Golden Artisan Ale” pretty much says it all. It is a nice golden color, has a clean taste, is light in the alcohol department (4.7% alc/vol) but is still stronger tasting and more complex on the pallet than your standard pilsner or lager. A truly creative creation! 8.5/10

Extra Stout: I enjoyed this one during a stint with stout. Despite the stiff competition, this baby held its own! Overall, it was smooth, velvety in texture, and with notes of chocolate and espresso. Like a good stout! At 7% alc/vol, its also stronger than your average stout or porter. A fitting accompaniment to ice cream, desert coffee, or something chocolatey. 8/10

Pike IPA: A deep amber color and clear hue greet the eyes the moment this beer hits the glass. Follow that up with a sharp floral aroma, and a strong, herbal taste, sweet pale and crystal malts, and a lingering dry finish, and you’ve got some idea of what this IPA is like. Definitely one of the better IPA’s I’ve tasted, and a nice break from the citrusy varieties (awesome though they are!). 9.5/10

Pike Dry Wit: I’ve had several wheat beers over the years, and this was definitely one of the most rare and complex! A strong flavor of wheat malts, a light spice palate that lingers and grows more intricate the deeper one drinks it. I noticed notes of coriander and orange on the first few sips, which is common in witbier. But gradually, I became aware of chamomile and lavender-like notes as well. A definite winner and a very interesting twist on the traditional wit. 9/10

Pike Monk’s Uncle Tripel: The closest thing I’ve tasted to Unibroue’s La Fin Du Monde without being the real thing. Combining wheat and barley malts with a generous dose of hops and then triple fermented, this beer comes off as heavy, rich, yeasty, and with a distinctly Belgian flavor. It’s bite and its intoxicating nose are not to be underestimated, neither is its strength (9% alc/vol) 8.5/10

Pike Old Bawdy Barley Wine: At 10% alc/vol, this seasonal beer definitely lives up to its name! Heavy, rich and very strong, this beer starts with a sugary nose, a rich malty sweetness, a good hop bite and a long, syrupy finish. Not for the faint of heart, but one of the best dessert beers I’ve had in recent years. 9/10

Man that was good beer! Can’t wait to sample more of their wares, of which there are several!