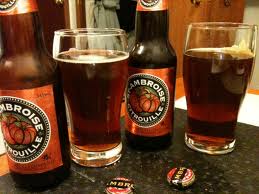 Hello again, and we’re back with the many delicious brews from Montreals award-winning purveyor of craft beers! Last time, I covered their regular lineup, including the beers that were were first for me and remain the best beers I’ve ever had in their respective categories (i.e. pale ales, oatmeal stouts, etc). Now, I’d like to get into their seasonal beers, of which they have many.

Most of these are relatively new to me, having just become available here in BC. And frankly, I sometimes wonder if I would be as crazy about St. Ambroise beers had they NOT been the ones to introduce me to certain varieties of beer. Well, I’m a much more seasoned beer drinker now, but I was still wholly impressed with the new additions to their lineup! Though they may not all be “the best”, they are certainly up there! Here goes…

St. Ambroise IPA: I saw this beer just a few months ago, located in one of my favorite liquor stores on the island (hey Beverly Street Liquor Store!). All I could say was, “’bout time!” and snatched some up. And after years of being heavily impressed with McAuslan, and as a huge fan of IPA’s, the bar was set pretty high on this one. However, McAuslan did it again! Though I’ve had some pretty damn good IPA’s in my time, this one was both impressive and rather unique! I thought I knew all there was to know about hops, but the combination of Golding and Willamette hops produces a flavor and an aroma which is both bitter and uniquely floral. In addition, the combination of the renowned Munich and Crystal malts allows for a degree of smoothness which balances very well with the bite and lingering hop aftertaste. Congrats, McAuslan, you’ve done it again! 5/5

St. Ambroise Scotch Ale: Done in the tradition of the “wee heavy” winter ales of Scotland, this beer boasts a strong, malty profile, a viscous taste that is balanced by a touch of sweetness, a good hop bite, and complex, lingering aftertaste that is reminiscent of vanilla and butterscotch. It’s like Scotland in a bottle! As a guy who doesn’t go in for the “wee heavies” much anymore, I still found this one a fitting example of a Scotch Ale and give it tops marks! 4/5

St. Ambroise Pumpkin Ale: Now here’s a variety that is becoming incredibly popular of late. Everywhere I turn, I see examples of pumpkin ales, the breweries of the Pacific Northwest, East, and everywhere in between producing their own version as a Fall Seasonal. And this baby is no slouch when compared to its competitors; in fact, I was quite impressed. Boasting a golden, caramel color, and smacking of pumpkin, cloves and allspice, this beer is a fitting accompaniment to Fall weather, thanksgiving feasts and as a Halloween treat! 4/5

St. Ambroise Raspberry Ale: Again, a popular example of fruit beers that have been making the rounds for over a decade, and a fitting follow-up to their Apricot Wheat Ale. In fact, I was somewhat surprised that it took this long for it to make an appearance, but I was happy with the end product. My wife, always the fan of rapsberry ales, is my go-to when it comes to comparisons, and this beer had some rather tough local competition (Longwood and Swann’s both brew their own faithful version of this). However, McAuslan’s faired well once again! This beer balances a good malty taste and a pleasant hop character with a strong infusion of raspberries, resulting in a flavor that is at once smooth, tart and semi-sweet. And the color… golden red. Nice touch! 4/5

St. Ambroise Vintage Ale: As I recently learned, St. Ambroise produces a Vintage Ale once a year that is of the same variety as their Millennial Ale (still the best beer I’ve ever had!) However, being outside of Quebec, I have a monster of a time trying to get my hands on some! Which is too bad, considering that this trend began shortly before I moved to the west coast. Apparently, due to high demand, McAuslan decided that beers such as their vaunted Millennial Ale needed to make more appearances, and do so almost every year now in the form of the Vintage. Much like their Millennial Ale, this ale is a combination of wheat and barley malts and hops that is fermented extra-long and then served unfiltered, resulting in a beer that is a deep rich color, smooth on the palate with a complex, semi-sweet flavor that calls to mind caramelized fruit and molasses. It’s time to call in favors! I want me some Vintage Ale for Christmas! 6/5 (again, I know it doesn’t make sense. It’s just that good!) 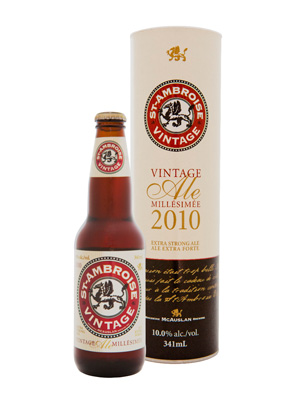 Yet to try: St. Ambroise Imperial Stout. Looking for it now…