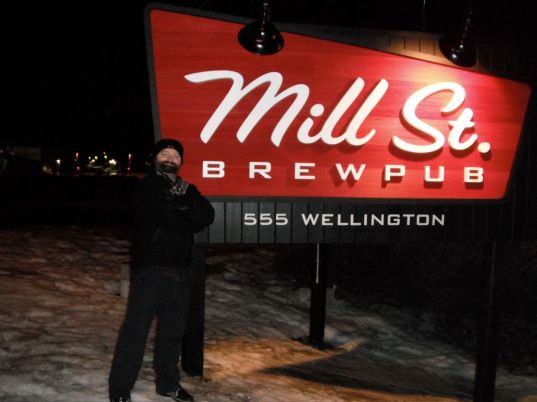 Several months back, a good friend of mine wrote to me here in BC and told me that I should come to Ottawa to check out the recent expansions in the beer market. Of particular interest to him was the Mill Street Brewpub, a new branch of the Toronto-based microbrewery that had opened up in Ottawa. After a quick check, I confirmed that this was in fact the brewery that made one of my favorite Ontario beers (the Tank House Pale Ale) and decided I would drop in next chance I got. And, as promised, when Carla and I visited Ottawa recently, we were sure to drop in.

Quite the experience, let me tell you. Having just come from Hull Quebec to attend Winterlude’s Winter Beer and Ice Wine event, we were already full of good cheer. And after a walk across the Portage Bridge to get back to Ottawa, we were also quite cold and in need of some warmth. So you can imagine how good we felt when we walked into the brewpub, located just up the road from the bridge, and saw hundreds of people looking pleased and even more sample glasses in wooden trays being carried around.

Things began as expected, we were told we’d have to wait… for forty-five minutes. We initially expressed some disappointment, until the hostess told us that that was down from the three hours others had to contend with earlier. “Okay!” we said, took a pager, and grabbed a seat at the bar. Some nice people were just vacating their seats, and in the process, we got to see the multi-hued array of beers they had ordered, and a plate of pulled-pork nachos. Our anticipation grew! Ten minutes later, our pager began to vibrate and they seated us in the section overlooking the Ottawa River. The night got progressively better from there…

The Atmosphere:
Before I get to the lovely dinner and samples we enjoyed, I would like to note the surroundings, as it brought back some curious memories. Located in a former grist mill at LeBreton Flats that overlooks the Ottawa River, and within walking distance from the Canadian War Museum, this 140 year old stone building has served as a restaurant for some years. In fact, I can recall eating there once as a boy, though I cannot for the life of me remember what it was called back then. Nevertheless, the good people at the Mill St. operation chose well when buying up this building. Combining heritage and modern comforts, the restaurant is just all-around festive and cozy! In addition to its stone walls, wooden tables and floors, one gets an eyeful of the brewing apparatus the moment they walk in (sealed behind plate glass of course). I was immediately reminded of the Pike Place brewpub in Seattle, another fine operation! 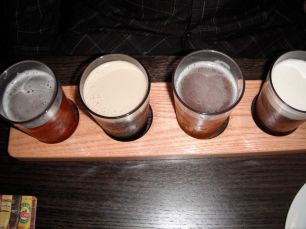 The Beer!:
Okay, down to business! I should note that though demand was high, my heroic server (who’s name I can’t remember, though I do seem to remember dark hair, a quick smile and a Van Dyke beard) was able to score me the final wooden sample tray and some glasses. They were plastic, but at this point, that didn’t matter. Thank to his efforts, I was able to try a full array of the their taps. Kudos to you, dear sir. May your barley be plentiful and your hops bitter and fragrant!

Tank House Ale: This pale ale is one beer I was on good terms with even before I set foot in the restaurant. Having sampled it years ago while visiting my good friends (Hi Chi! Hi Christina!) in Toronto, it was also the beer I drank on my last visit with both of them before packing up and moving to the West Coast. And my reasons for liking it remain. Hoppy, refreshing and with a citrusy nose, the Tank House has a nice dry start and a lingering finish that calls to mind all that is great about a pale ale. Though I have been known to love many a pale ale, this one ranks among my favorites, comparable only to St. Amboise and (more recently) Hoyne’s Down Easy. 5/5

Portage Ale: This beer was an interesting diversion from the hoppy Tank House, and whose name I found irresistible since a good chunk of my childhood was spent camping and portaging! A lighter cream ale that is at once crisp, light in hue and in terms of hops, its subtle flavor and clean finish were a good accompaniment to my hot wings (more on that later!). Using pale malts and a combination of hops, this beer is reminiscent of lager, a definite go-to for those looking for a pleasant and easy-drinking experience. 3.75/5

Valley Irish: No beer lineup is complete without an Irish Ale, I always say! Done in the traditional Irish-style, this beer combines a creamy, tawny taste with a clean finish that calls to mind such British classics as Boddingtons and Kilkenny, though I honestly preferred this one to either of those. In addition to being better tasting, in my humble opinion, it is also made in honor of the Ottawa valley and honors its proud heritage! 3.75/5

Cobblestone Stout: Next up was their stout, which any beer snob will tell you is an indispensable part of any sample lineup! The Cobblestone is not to be confused with their Coffee Porter however, another fine beer that I’ve had on several other occasions. And in both cases, I was quite pleased. Much like the porter, this beer is smooth, highly tawny on the palate and boasts rich coffee notes which linger long after you sip it down (Do not gulp! You cannot appreciate it if you gulp!). 4/5

Helles Bock: And last, but certainly not least, was their bock lager (word of advice: Always save a bock for last, as its the most likely to compliment dessert-fare). Translated from German, Helles refers to the pale color of the lager, which I would describe as a light amber hue. In addition, the bock has a strong malty taste flavor that boasts traces of citrus which is balanced out by a discernible hop finish. Dry, smooth, but not too sweet, this beer is a good accompaniment to either the main course or desserts. 3.75/5

The Food:
As a final note, I would like to mention what we had to eat, as it would seem unfair to mention everything else and not include the food. Though we could hardly sample everything on the menu, Carla and I were pretty impressed by what we saw. As I mentioned earlier, this brewpub boasts some pulled-pork items which are sure to tantalize the glutton in all of us. And the restaurant also comes highly recommended for their Wild Boar Ragu, which I will definitely be trying next time we’re in the area! However, they’re also pretty good at pub fare and comfort food, as my wife and I quickly learned. Here’s what we had:

Wings: As is customary for me, I went with the wings for my first visit. No good pub can pass the bar if they can’t make a good wing, I always say. So it pleases to me to say that Mill St. is in fact a damn good pub! Their hot wings were nice and meaty but not overly breaded, which is a pitfall for many pubs who try to pass off emaciated wings by smothering them in batter. The hot sauce was also a surprise, being multi-layered in addition to real spicey, which is a step up from places that’ll give you Frank’s Red Hot and nothing more. Good job, Mill St! You passed the wing’s test! 4/5

Spinach Salad: Another favorite of mine, the perfect accompaniment to any plate of wings. And ’round here, they do it up fancy! In addition to goat’s cheese, candied walnuts and dried cranberries, their salad boasts red and heirloom beats; which though I never been a big fan of, I certainly appreciated. The artistic appeal alone was well worth the price of admission, but the health benefits pay for themselves! The dressing was also nice and light, composed of their own Frambozen beer and a balsamic vinaigrette. Num! 4/5

Chicken Pot Pie: Here’s where the comfort comes in! Flaky, delightful pastry, chicken, peas and mashed potatoes make up this lovely meal, which is then covered in a light chicken gravy. At once tender, juicy, and even a little smoky-flavored, Carla was a happy girl with this as her dinner. It was accompanied by some creamy Yukon Gold spuds that just expanded on the comfort factor. Though it was Carla’s dish, I was delighted to pick at it! 5/5

I guess it goes without saying that this was a highly enjoyable experience, and one which we intend to repeat. I strongly recommend that anyone who is fortunate enough to live in the Ottawa area year-round (as opposed to those of us who have to fly in!) get out to this place and try the fare and beer ASAP. I also recommend that they call ahead and reserve since the place is already popular and sure to be packed on any given weekend. Also, if you got time, check out the links below for the restaurant and their original Toronto location. Their beer to easily found at just about LCBO in the province 😉