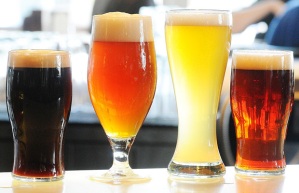 Back from Ladysmith for the weekend, and I just happened to find myself some new beers while making a routine stop at one of Duncan’s many liquor stores. Man, that town is stocked! And this time around, I discovered a special feature. Brewed by Central City from Surrey, BC (the same makers as the famous Red Racer lineup), their Imperial IPA is what you might call an IPA on steroids, or a very strong IPA. Either description would be apt.

As an Imperial IPA, it is strong in terms of its alcohol content (9.5% alc/vol), hop content (90 IBU’s), and malt flavor. The end result is something that can be a bit overwhelming for the uninitiated, but which is a rewarding experience for fans of strong ales and IPA’s alike. And in many ways, the different strengths serve to round each other out, providing a drinking experience that is both challenging, yet strangely balanced.

In the end, this beer lives up to the advertising. When a beer includes the term “Imperial” in its title, it means a beer of greater strength and density. As such, one can expect a beer with some strong, coarser malts and real toasty flavor. And where IPA’s are involved, one can also expect plenty of hops and a flavor that gravitates between the floral, bitter and citrusy. And that’s exactly what this beer has going on! If you’re a fan of the strong, challenging, sweet, and bitter, pick yourself up a bottle before it goes back to the mainland.