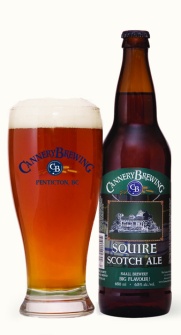 Description: This Scotch Ale, which is part of Cannery’s regular lineup, is named in honor of the Country Squire restaurant located in Naramata, BC. True to the tradition, this brew employs pale malt, a light hopping, and traces of scotch whiskey.

Tasting Notes: This is my first sampling of Cannery’s Scotch, and it was quite impressive. True to the name, this ale packs a lot of whiskey flavor, which includes notes of smokey peat moss flavor, but an otherwise smooth malt base. That being said, it was not my favorite, as the malt base was a bit light for my taste. Still, a fine example of a fine ale that is brewed in the Scotch tradition.