Description: This IPA is one of the breweries year-round offerings, and is the result of a collaborative effort with John Kimmich – the brewmaster of The Alchemist brewery in Waterbury, Vermont. In the American IPA fashion, it is fashioned using a rich malt base and then bittered using an “immoral” amount of Simcoe, Citra and Centennial hops.

Tasting Notes: This is definitely a classic IPA. Strong in the alcohol department (though not too much), rich in the malt department, and strong and diverse in the hop flavor department. I’ve been a fan of just about everything Dieu du Ciel creates, and I am glad I found this one too.

Description: As part of their Eurus Series – a line of limited-released European-inspired bottle-conditioned ales – this ale is made using a combination of Pilsner, Munich and acidulated malts. It is then dry-hopped with a modest amount of Galaxy hops and fermented using Brett Trois, Lactobacillus and Belgian strains of yeast.

Tasting Notes: This was a very interesting take on a sour ale. By employing a light malt base and mild dry-hopping, you really get to appreciate the yeasty, effervescent sour flavor. What comes through are some strong notes of peach and passion fruit, but the most noticeable is the lemonade flavor. Quite interesting! 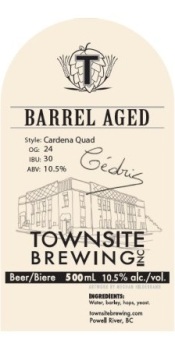 Description: The third installment in their “Hulk Series” – named for the decommissioned vessels that make up the floating breakwater in Powell River – Cardena is a Belgian-style Quadrupel ale. And since 2015, they have be re-releasing this ale as part of the breweries new barrel-aged lineup, where established brews are aged in whiskey barrels.

Tasting Notes: I loved Cardena when I first tried it. In fact, it would be fair to say that it was one of the best beers I had in 2014. So I was a little intrigued and surprised by the addition of the barrel-aging process, which I’ve had mixed experiences with. In this case, the end resuilt was interesting, but a bit perplexing. On the one hand, you have all that was great about the Cardena. A strong Abbey-style ale rich with notes of brown sugar, dates, raisins, and figgy pudding.

But add to that the bite of whiskey and the end result was (and I’m not bullshitting here) a bit like blue cheese! It was the oddest thing, getting a taste I immediately recognized but couldn’t quite place. And then I remembered the last time i had hot wings or a spinach salad! Ordinarily, I love blue cheese, but not so much in my beer. So I had to give this one a slightly mixed review. Great to be branching out, but 2016’s Barrel aged Cardena is not quite what I was hoping for.