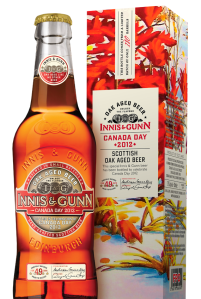 In honor of Canada Day, I’ve decided to review a beer that was also made in honor of Canada Day. Strangely, this Scottish brewery has been doing this every year for the past several years. Thought it is made and bottled overseas using overseas ingredients, the labor is apparently one of love for the Great White North.

As usual, Innis and Gunn age their beer in oak whiskey barrels and combine ale and barley malt with Golding hops to get a beer that is dark, rich, and kind of sweet. It also combines the characteristics of both a whiskey and a ruby ale, being both malty, smokey, mossy, and a little bitter.

Happy Canada to all! And to those Americans still waiting on Independence Day, know that Innis and Gunn has begun releasing another beer in honor of your national holiday as well. And the reviews are comparably good, from what I can tell! I shall have to make another trip to the beer store soon just to be sure 😉