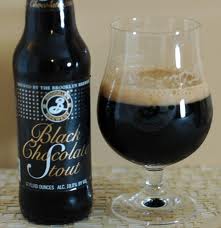 Is it an imperial stout? Is it a barely wine? That’s what I wondered the moment I opened a bottle of this beer and gave it a whif. The aroma immediately reminded me of barley wine, that thick, syrupy smell that makes you think of pudding and molasses. Then came the taste, and the mystery continued…

I only recently came into contact with Brooklyn, a micro-brewery that has been making craft beer since the late 80’s. Having sampled their lager at a local eatery here in Victoria, I found that I was quite pleased. And after some research, I learned that they’ve earned a few awards for their products over the years. So when my bro-in-law got me some for Christmas (hi Isaac!), I was pretty pleased.

On the one hand, the use of dark malts give it a bitter, chocolatey flavor. On the other, the fact that it is an especially strong beer (10 % alc/vol) lends it the strong, sweet taste of a barley wine. An interesting combination if ever there was one, but the taste, smell and deleterious effects were nothing short of welcome. And as a fan of both chocolate stouts and barley wines, I could appreciate the combination.

You might not think these two would go together, but I’ve been wrong about combos before. Honey and beer and Pilsner and IPA come to mind, and that’s just off the top of my head! So if you’re in a private beer store and are fan of stouts, strong beers, or barley wines, I recommend you pick up a bottle of this seasonal stout! Perfect for the holidays, great when paired with deserts and decadent when used to make a beer float! 4/5