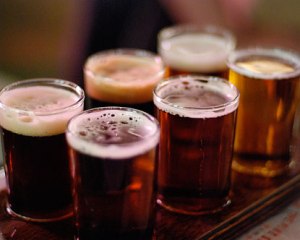 Spring, or as I’ve come to think of it, the season of the India Pale Ale, continues with more samples procured from my faithful local purveyors! And since I’m apparently taking on more new beers than I can review at any one time, I’ve decided to do another two-fer today, acknowledging two distinct examples of brewing excellence. And though they come from vastly different places, one the very farthest outpost on the West Coast (Tofino), and the other nestled in the very heart of Cascadia (Eugene, Oregon), I found them very similar in style, taste, and their dedication to Pacific Northwestern brewing.

First up, a long-awaited second helping from the Tofino Brewery, which I got a chance to sample well over a year ago during my wife and I’s summer visit. Unfortunately, I only ever got to try their Tuff Session, and lamented that we couldn’t stick around long enough to do a little brewery tour. I tell ya, its about time Tofino had its own brewery, and one that bore its name proudly!

And I was quite impressed with this installment in their lineup. Boasted strong malts, a variety of hops (and plenty of them), and a solid alcohol content (7.5% alc/vol), it’s got pretty everything you’d expect from a good India Pale Ale. But there’s still room for pleasant surprises, like how the hop profile is well balanced between tropical, piney and citrus flavors.

Next up is another faithful addition from the Ninkasi brewery, which once again impressed the hell out of me with their Tricerahops (very punny!) IPA. Much like their standard IPA, it combined a good dose of tropical hop aroma with citrus and pine. This also came through in the flavor, which was varied and very powerful, especially when combined with the high gravity malts, semi-sweet, viscous malts.

This is the result of multiple varieties of malt and hops – which in the former case include Pale, Munich and Carahell, and in the latter Summit, Amarillo, Centennial, and Palisade – and a hefty dose thereof. Overall, this beer rates at a hefty 100 IBUs, a Starting Gravity of 1080, and an alcohol content of 8.8% alc/vol.

Hello great state of Oregon! It seems I have another two-fer that is the product of mere chance and good fortune. Recently, my local beer store began carrying some of Ninkasi’s product line, and given that I’ve seen it around several of my other haunts, I decided to give it a spin. In the past week, I’ve tried two of their regular lineup, a double red and an IPA, and was pretty impressed with both.

First up, the Believer Double Red Ale. As I said before, I was quite impressed with this first installment from their lineup. Immediately I noticed the interesting floral and sweet bouquet, which was also present in their IPA. And the flavor was consistent, delivering a hop flavor that smacks of your traditional Centennials, plus the Summit variety which are largely used in Barley Wines (another aspect that is apparent from the get go).

Combined with a deep, rich malt profile, this beer packs a bit of a double-whammy. It begins with a deep malty taste that is slightly sweet and syrupy, also reminiscent of barley wine, and a complex hop flavor that’s both citrusy and grassy. The flavor then transitions where the malts and hops deliver in the aftertaste department, becoming coarse and bitter respectively.

Second, there is the Total Dominion IPA. Of the two, this was my favorite, though only by a small margin. Much like the Believer, it is a complex beer boasting a good strength (6.7% compared to the red ale’s 6.9% alc/vol) and a combination of hops that lend it a distinct aroma and flavor. But unlike the Believer, it is lighter in terms of appearance and malts. Light in color, relatively light in malts, the main thrust of this customer comes through in the hops.

Rated at 85 IBUs, its no secret that this IPA has a bitter hop profile! However, said profile has many layers to it and this is noticeable in the smell as well as the taste, consisting of Summit (once again), Amarillo and Crystal hops. In terms of taste, this results in a citrus bite, followed by notes of tropical fruit (I detected passion fruit and pineapple), followed by a long, lingering bitter finish.

Not a bad start for this operation, located in Eugene, Oregon and not far from where my sister and brother-in-law live. Perhaps I shall arrange for that road trip sooner other than later 😉 And that’s all for now. One of these days, I really MUST find the remaining beers on my winter list and polish that long document off! Otherwise, I’ll be transitioning into Spring seasonal beers before I ever complete it. How humiliating would that be?