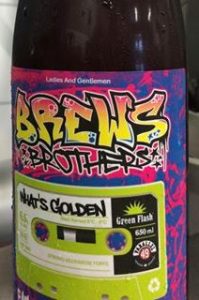 Description: Straight from their third collaborative effort with other North American brewries – aka. Brews Brothers Vol. 3 – the East Meets West IPA is a golden India pale ale that combines east and west coast influences. Like the other installments in this year’s series, this beer is hip-hoped themed, and named in honor of the Jurassic 5’s famous single, “What’s Golden”.

Tasting Notes: This brew definitely has all the right elements that make west coast and east coast IPAs so palatable. That includes a nice and cloudy golden-orange hue, a nose with grassy/piney hops and citrus fruit, and plenty of the same hop flavor. The flavor department is where it is especially decent, mixing drier east coast hops with your more fruity and citrusy west coast varieties. And it rounds it all out nicely with a refreshing, just-bitter-enough finish!

Description:  Done in collaboration with Gigantic Brewing’s Ben Love. This beer is brewed in the style of an American India Pale Ale, and so-named because of its deep copper color. The name is a shout out to rap artist Blackalicious’ song of the same name.

Tasting Notes: This beer strikes a nice balance between maltiness, hop bitterness and hop fruitiness. A generous dose of West Coast hops comes through, bringing plenty of dry bitterness and complexiy. The beer pours a deep copper, has notes of grass, herbs, pineapple and peach on the nose, and more of the same on the palate.

Baby Got Back, a Hoppy Hefeweizen:

Description: Done in collaboration with Scuttlebutt Brewing’s Matt Stromberg. This is a traditional style hefeweizen brewed with a modern breed of hops hailing from Germany. And of course, it is named in honor of the classic ode to big backsides by Sir Mixalot.

Tasting Notes: This beer pours a nice golden-orange, is cloudy and has a lacy head. It has notes of banana, clover and citrus on the nose, and has plenty more of that in the flavor department. It also has a discernible mineral tang and a bitter, yeasty finish. 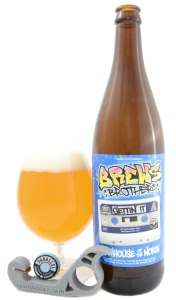 Description:  Done in collaboration with 49th State Brewing’s Greg Mills. This unique beer was brewed with a Scandinavian farmhouse yeast cultivated in Norway. Tart in flavour, this ale offers aromas of orange peel contributed by the yeast and Amarillo hops.

Tasting Notes: This is a nice, light twist on the Saison. It pours a deep gold, is slightly cloudy, and produces a lacy foam head. It has a light nose with hints of yeast, melon, spices and bread. The flavor is much the same, with a  notes of melon, grains, minerals, and the mild but funky and effervescent yeast flavor that makes Saisons famous.