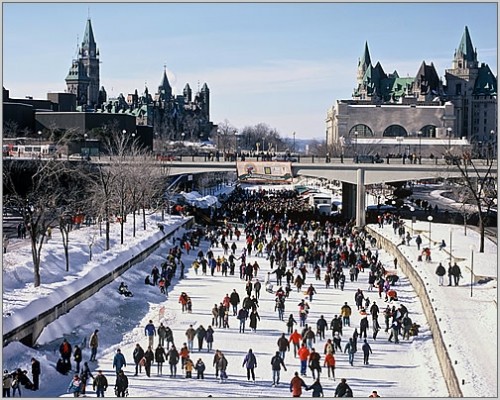 Greeting all from the nation’s capital! Some interesting things have transpired since our arrival. Some friends came out, some pubs were visited, some pints were tilted. All good times! And as usual, I intend to write about it all, particularly all the beers we drank! Some old, some new, there were many brands that were drunk even thus far that have been worthy of a review. It will take me days to cover them all, so please, your indulgence as I try to do it all justice…

My first review is dedicated to the beers encountered at a timely and impressive event:The Winter Beers and Ice Wines event that took place during the weekend of the 17th/18th. Not only did it coincide with our visit nicely, my darling wife had the foresight to suggest we book some VIP tickets. As such, we got the deluxe experience! In addition to sampling many, many beers from the Quebec side of the border, we got a taste of some true culinary delights in an upscale atmosphere. It all went down at the Maison du Citoyen in Hull, Quebec, and here’s what I thought of what I tasted, by brand and name.

Brasseurs Du Temps:
Located in Gatineau, Quebec, this brewery was the only one at the tasting that had its own booth staffed by its own people. And given the fact that the sample glasses were also stamped with their company logo, I got the distinct impression they were hosting the thing. All of their brews were made in accordance with traditional European and (more specifically) Belgian brewing, at least the ones I tried. As such, they were strong, heavy, dark and deep! Not to mention flavorful.

Dumduminator: Named in honor of its creator, Dominique Gosselin (Dumdum to his friends), this dunkelweizenbock was a nice surprise, calling to mind one of my all time favorites: Aventinus! And like its predecessor, it was dark, strong, had a heady foam, and some rich wheat malts. However, the DD was different in that it had a distinct banana flavor in addition to its spicey notes. A nice opening to this tasting experience! 4/5

La Saison Basse: This seasonal beer, named in honor of the fall, is a blonde ale that boasts a variety of spices with an intense, distinctly Belgian taste. Overall, I was reminded of Duvel, another blonde done in the Belgian fashion that boasted some gruff malts. I should also note, in a move that is decidedly clever, this beer has an opposite known as La Saison Haute, a seasonal spring beer. Unfortunately, this one was not available at the tasting. Guess I’ll have to wait til next year! 3.75/5

Messe de Minuit, 2010: A holiday beer which, quite frankly, is like Christmas in a glass! The color is black, the smell is fruity and spicey, and the nose and taste are similar to a stout. Add to that a rich flavor that is reminiscent of figgy pudding, cloves and spices, and you get a pretty good picture of what this beer is all about. A great finish to this breweries lineup. 4.5/5

I just wish I could have sampled more. A quick perusal of their website would seem to indicate that there’s certainly no shortage! I wonder if they deliver…
http://www.brasseursdutemps.com/beers/our-full-range

IGA Famille Charles:
Said family is a major compact in Quebec which owns the Independent Grocers Association, a number of craft breweries, and the relative giants of Molson, Coors, and Rickards Brewing. Overall, I’d say I spent the majority of my time at this booth, trying their beer, talking to their patrons, and bugging their representatives for info! Here’s what I sampled and where it came from:

L’Assoiffe: brewed by Brasseurs du Monde, from St-Hyacinthe, Quebec, this beer’s name literally translates to “thirsty”. A double brown ale, brewed Belgian-style, it was expectedly strong and quite dark, combining a strong malty profile with the tawny character of a brown. Lightly scented but firmly flavored, it was quite the thirst quencher! 3.75/5

Trois-Mousquetaires Wiezenbock: this beer, I quickly realized, is something we have in BC. In fact, I can recall drinking one or two Mousquetaires not that long ago; luckily they weren’t the Wiezenbock so I didn’t consider this experience wasted! Brewed in Brossard, Quebec, Trois Mousquetaires is another Quebec craft brewery specializing in continental-style beer making. And at 10% alc/vol, this wheat beer was certainly a unique experience, combining strong wheat  malts with a very rich, very dark profile that called to mind brown sugar, molasses and a hint of smoke and bananas. Quite the powerful number, and definitely for the barley wine enthusiast, if not the casual beer drinker! 3.5/5

La Noblesse: Possibly my favorite from the IGA section, this beer was reminiscent of Chimay in a number of ways. For starters, its a dark amber, cloudy in appearance, and boasts a strong oaky flavor that reminds one of sour ale.  I was also told to be on the lookout for a touch of vanilla, though I admittedly took awhile to find it! Definitely something I’ll be on the lookout for in the future. 4/5

McAuslan Brewing:
Technically, the bar hosting McAuslan’s fine products was hosted by the radio station CKOI (104.7 Outaouais), but to me, they were the centerpiece so they might as well have been running it themselves. Several other brewers were represented here; unfortunately, I only got to try one other. Lucky for me, it was worth it since I finally got to try McAuslan’s latest Vintage Ale as well as the rather unique and intriguing Diablo. Of these:

Millesimee: This is the name of McAuslan’s 2010 Vintage Ale. Awhile back, I reviewed McAuslan and claimed that their Millennial Ale, the 2000 Vintage, was the best beer I’ve ever tried. Well that’s still true, but unfortunately, I’ve been unable to offer any opinions on any of the vintages they’ve produced since. Thanks to this event, those days are now behind me, even if it’s likely to be awhile before I can review any of their vintages again. That being said, I have to say that I was unimpressed with this latest vintage by the good folks at McAuslan. Unlike its Millennial predecessor, the 2010 Vintage was an amber ale, very strong, slightly sweet, and quite rough on the palatte. I was reminded of Scotch-Ale, the “Wee Heavy” style of beer that combines rich, heavy malts with a touch of sweetness and a bitter, highly viscous aftertaste. That’s what you got here, and I have to say that I do not think these different elements go together well. This is not to say that the beer is a bad contribution, far from it! In fact, its without a doubt a faithful adaptation of an extra-strong amber ale and an interesting choice for their latest vintage. It just didn’t agree with me personally. Mainly because the strong flavor has a way of really lingering. Seriously, after a glass of this, everything tasted rough and bitter! 3/5

El Diablo: Last of the festivals lineup comes to you from the Brasserie du Lievre located in Mont-Laurier, Quebec. And I can honestly say that my choice to try this over several others from this bar was thematically consistent, given the fact that it too was a strong amber, rough on the palatte, and quite rich and chewy. However, the Diablo combines all of this with a strong, vanilla flavor that is surprising and quite palatable. A touch of velvet you might say to an otherwise rough and tough brew. Little wonder then why they call it Diablo! 3.75/5

Well, that is all for now. Like I said, there were many drinking experiences during my Ottawa trip, and it will take some time to do it all justice. Lord knows I spent plenty of time this trip with a beer in one hand and my PDA in the other, constantly drinking and typing, hoping to get all my impressions down so I could do faithful reviews later.

Coming up next, the Mill Street Brewpub, a newly opened branch of the Toronto-based craft brewery!