Description: Consistent with the popular Oktoberfest-style of German Lager, the Gerstenmeister combines (what I believe are) Munich malts with a mild hopping, which is then aged for six months of cool confinement to effect a rich, malty, and mildy hoppy flavor.

Tasting Notes: As Marzen’s go, this beer was a little light for my taste. Still, it had all the right things going for it – a rich malt, base, smooth character, a light tang, and some sweet notes that reminded me of shortbread and toffee. And despite generally being on the lighter side, I have found Big Rock’s wares always comes through where it counts. This beer is the first sampling from my most recent procurement from the local beer stores post-holiday surpluses. It’s known as the Family Jewels Pack, and stay tuned, because there are a few more to come!

Description: Named in honor of the Klickitat people of the Pacific Northwest, this pale ale is part of Alameda’s regular lineup. It is fashioned using Caramel and Munich malts, and then bittered with 3 different additions of Northwest-grown Cascade hops to emphasize the different aspects of their flavor.

Tasting Notes: All told, this was a very descent and well-balanced pale ale. The mouthfeel and smooth malt flavor reminded me a red ale, but the hop bitterness – which really comes through in a variety of flavors – was that a good solid pale. Added to that is the nice amber hue and a cloudy profile that makes it an all around pleasurable drinking experience!

Description: Category 12, which is located just up the road from me, has recently opened its doors and began distributing. This is their second release, and my first sampling. The Black IPA is made using Carafa and Munich malts and then bittered with Simcoe, Cascade, and Columbus hops.

Tasting Notes: This beer delivered in all the expected departments. On the black side of things, it had dark roasted malts that were reminiscent of a good stout or porter. On the IPA side of things, it had a good dose of citrus and herbal hop flavor that lingered long after the initial tasting. A good start for this hometown brewery, and a good intro for me.

Description: As part of their Brewmaster Series, this Czech Pilsner is available year round and now comes in both 650ml bottles and six packs. In the tradition of Bohemian-style lagers, this beer is fashioned using Vienna and Munich malts, and then bittered with Noble Saaz hops.

Tasting Notes: It took me some time to review this beer, and I’m rather sorry I didn’t try it sooner. True to its roots, the beer is both crisp and slightly sweet, owning to the combination of Vienna and Munich malt, which also impart a slight, grainy texture to it. The addition of Saaz hops provides a slight bitterness which rounds this out nicely, leading to an all-around flavorful, but clean and refreshing, drinking experience.

Description: Yet another limited release by the Parallel 49 Brewery, this beer is fashioned in the historic lager style known as doppelbock, which monastic have been producing since the 18th century for the consumption of German royalty and nobility. This beer uses a combination of Pilsner and Munich malts and is fermented and aged for an extended period to give it a dark, rich, and more alcoholic profile.

Tasting Notes: This latest release from P49 was certainly consistent with what I’ve come to know about bocks and doppelbocks. It was dark, rich, especially malty, and had a smooth, velvety profile. In addition, it has a discernible hint of vanilla that makes it especially drinkable and appetizing, in addition to a hint of herbal hops that – when combined with its other flavors – are reminiscent of Jagermeister and herb liquor. 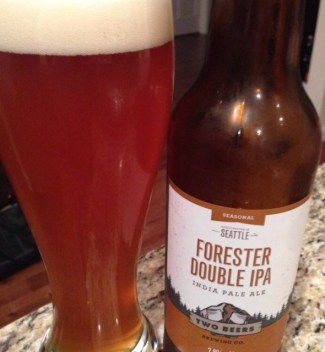 Description: The Forester Double IPA is a seasonal beer and the brewery’s expansion on their Evo IPA. And as the name suggests, is naturally stronger, maltier, and hoppier than the original. In terms of malts, it employs Base, Crystal, Vienna, Munich, and Carapils, and is bittered using Simcoe, Amarillo, Centenniel, and Super G hops.

Tasting Notes: I’ve had many India Pale Ales in my time and more than a few doubles. But this was definitely one of the better ones. In addition to not being terribly high in alcohol content or very coarse, the hop flavor was also just bitter enough, and plenty diverse. It’s the mark of a good double IPA that it can be strong all around, but maintain a nice balance. Looking forward to the next one! 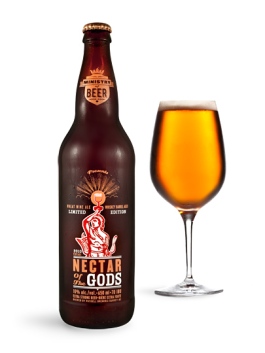 Description: As part of the brewery’s Specialty Series, this extra strong ale is fashioned using fifty-percent wheat malts and fifty-percent Munich malts. The end product is then aged for four months in Tennessee Bourbon Barrels and is available seasonally.

Tasting Notes: This beer is wonderfully complex, delivering strong fruit esters, notes of vanilla and a smokey, whiskey finish. Wheat and Munich malts provide a smooth, semi-sweet base, while the presence of tannin and fruit flavors provide a lovely complexity. The process is then completed by the presence of vanilla and smokey bourbon flavor, which compliments the sweetness and fruit flavor exceptionally. Definitely one of the best beers I’ve had so far this year.

It had to happen sooner or later. With all the experimentation happening since the new management took over, it was only a matter of time before they produced a stout that combined a few disparate brewing traditions. That’s the idea behind Moon Under Water’s Victoria Sticke Fusion Stout, a beer that combines wheat, chocolate and Munich malts to create a hefeweizen/stout – something that is toasted, bitter, and also effervescent and yeasty all at once.

And while it is a brave combination, it was not their greatest experiment to date, in my humble opinion. While I lauded their combination of hefeweizen and bock to create their Victorious Weizenbock, somehow, the combination of flavors just didn’t seem to compliment each other this time around. While they were both present in abundance, they tended to compete for attention rather than blend seamlessly into each other. Black in appearance and opaque, with a lacy, foam head, the beer has a mixed nose of wheat malt, yeast, and toasted dark malts. In terms of flavor, what you get begins with the yeasty, smooth notes of hefeweizen, followed by the mild chocolate notes, toasted malts, and strong bitterness of a stout. All this comes at a respectable 6% alc/vol.

In short, not their best experiment in brewing thus far. But certainly not a poor beer, and their past efforts have certainly earned them the benefit of the doubt with this, the first stout to enter their regular lineup. As we get into winter, I do hope they can be coaxed into making a barely wine or Christmas Ale of some kind. Man, I’ve been craving those lately! 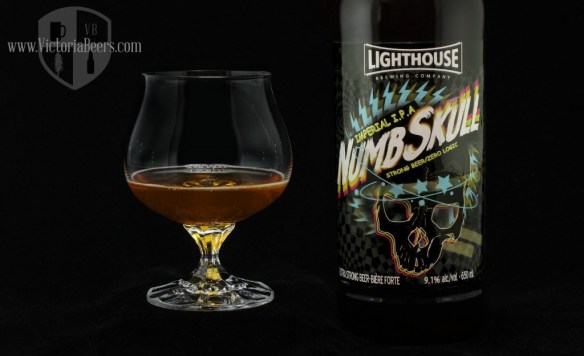 Lighthouse has been doing some impressive things of late. Whether its been their “Big Flavor” series, or their Mountain Goat Maibock and Three Weeds Belgian Wit, or their Switchback IPA and Tasman Session Ale, they’ve been pretty much killing it as of late. And now they’ve unveiled this latest beer, the Numbskull Imperial IPA, which pretty much accomplishes everything an extra strong, hopped-up IPA should. This includes boasted a rather rich malt profile, a wide array of hops (in heavy concentration), and a strong and powerful alcohol content (9.1% alc/vol).

According to the brewery’s own website, the malts of choice include Munich, Pale and Caramel Malts, which allow for a sweet and potent combination. Meanwhile, the hops include the Rakua, Galaxy and Citra varieties, which add up to a citrusy and tropical profile that is both appetizing and quite potent. Especially where the tropical nose and flavor come through. I can honestly attest that it’s like drinking pineapple juice, except with a lovely, malty, alcohol-laced kick!

Next up is their anniversary ale, which I intend to enjoy thoroughly! Congratulations, Lighthouse, you’ve been blowing it out of the water of late. At this rate, you might just become my favorite BC brewery!