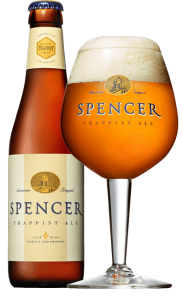 Description: This brew is the Abbey’s only brew, and is made in the Trappist fashion using a proprietary blend of 2 row and 6 row malted barley, and some caramel Munich specialty malt from Wisconsin for color. It is then bittered using a combination of Willamette, Nugget, and other hops from Washington state’s Yakima Valley. It is then unpasteurized and unfiltered with active yeast still in the bottle.

Tasting Notes: This brew was a fortunate find. It definitely has the character of a Trappist ale, possessing that same oaky, yeasty flavor that I have come to associate with beers like Orval and Chimay. But it is also delightfully subtle and lightly colored, and comes with notes of fruit – the foremost being cherry and apricot – that you don’t usually get from a Belgian Trappist. I will be definitely be seeking more in the future.

Description: This is New Belgium’s 2015 vintage of their La Folie series of sours. Much like last year’s, this beer is brewed in venerated Oud Bruine style of Belgian sours, combining Pale, Munich Carpils, C-80, Chocolate malts are combined with Nugget hops. It is then fermented using wild brettanomyces strains and then barrel aged in oak barrels for up to 3 years.

Tasting Notes: This year’s offering was much as I remember, tart and sour as all get-out! And much like a good sour brown, it possessed all the usual oaky, fruity, and yeast notes, bringing to mind flavors of sour cherry, plum skin, and red wine tannins. 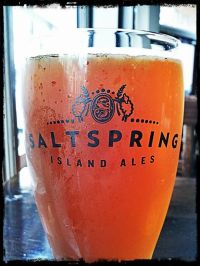 Description: Brewed for the Hopoxia 2014 – the fourth annual festival dedicated to the brewing of hoppy craft beers – the Homegrown Pale Ale is made using a combination of locally sources hops. These include 90% Nugget, 5% Willamette, and 5% Cascade hops, all grown here in BC and added fresh to this hoppy, unfiltered ale.

Tasting Notes: This ale, in addition to using locally-sourced English and West Coast varieties of hops, was also definitely of the wet-hopped variety. This is clear from the hop flavor which is complex, ever-present, but always subtle. Definitely an interesting offer for Hopoxia – a heavily hopped beer that manages to stay clean tasting and refreshing throughout. 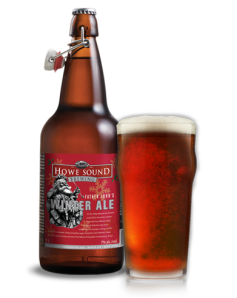 Another Christmas beer that graced my doorstep, courtesy of my friendly neighbor! And this is one that I’ve certainly had in the past, but which I neglected to do a review for thus far. What can I say, this blog didn’t always exist, and I certainly did brink beer in my pre-blogging days. But I’m nothing if not a fan of Howe Sound, and I’m always interested in anything that was inspired by (or named after) John Mitchell, the venerable brewmaster who started the Howe Sound operation. That is where this beer takes its name from, fyi, as part of the breweries extensive John Mitchell series.

As part of said series, this beer is a fitting example of something inspired by Mitchell, being a particularly malty, English-style winter brew. Made with four different malts, a mild dose of Nugget & Hallertau hops, and a hint of spice, the beer calls to mind both the holiday season and an English pub ale that is rich in toffee-style malts and has a nice, Christmasy finish.

Always good to resample old beers and give them their due. I sincerely hope I can remember all the beers I ever drank so that I might one day give them all a faithful review. Might take some time, but I’m willing to do the legwork!

I think it’s fair to say the season of winter beer is officially over. Lately, I’ve been inundated with IPAs, Pales and Ambers that foretell the coming of Spring, much like the mild weather we’ve been experiencing.

And to break my fast on more inclement-weather beers, I’ve gone back to Eugene Oregon, or rather just sampled a beer from there. Known as their ReNEWale, this seasonal release meets the winter thaw with a beer that’s dry, malty, and has a complex hop flavor. True to its roots, its got everything an EBS is known for, combining pale Crystal, Pilsner, and Munich matls with East Kent Golding, Northern, and Nugget hops. All this combines to give it a a darker, syrupy character, with a decidedly light, bitter mouth feel.

Another winner from the Ninkasi operation! However, having reviewed their list of beers, I am dubiously aware that I’ve barely scratched the surface. So many regular beers and so many seasonals… I’m both excited and bewildered at the same time! Stay tuned for more on the Spring Beer front!