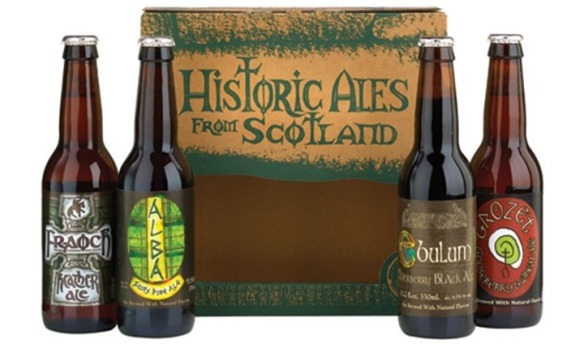 It’s just one day to Christmas, and as expected, I finished the pack of Historic Ales early. Call me self-indulgent, but there was simply no way I couldn’t let my curiosity to get the better of me. It’s been many years since I drank from this pack, and my tastes have become somewhat refined in that time. And interestingly enough, I found that I actually enjoyed the experience more this time around. So without further ado, here are the last two samples from the Williams Brother’s historic lineup.

My favorite of the pack, the Ebulum Elderberry Black Ale is brewed in accordance with the Celtic tradition that was introduced to Scotland by Welsh druids in the 9th century. Traditionally, this ale was crafted and then passed between the people of the village during the Autumn festival. The recipe for this particular beer was taken from a 16th century record of domestic drinking in the Scottish Highlands and is brewed with roasted barley and chocolate malt, then infused with elderberries to deliver a dark, rich, malty beer with a stout-like flavor that also has some satisfying fruity notes. It is also the second strongest beer of the collection, weighing in at 6.5% alc/vol, making it an all around very pleasant drinking experience. Whenever I get a pack, I usually go for this one first. I feel my restraint this year is to be commended!

The most ancient and venerated style in this collection, Fraoch takes it name from the Gaelic word for “Heather”, and just happens to be the oldest variety of beer still consumed today. For over four thousand years, this sort of beer has been brewed in the Highlands, and is often associated with the Picts who ruled Scotland until the 9th century (hence the label art, which is Pict-inspired). The beer a combination of boiled barely, sweet gale, and an infusion of heather flowers, a flora native to Scotland. Until the 18th century, when British law mandated that Scottish brewers begin using hops, it was extremely popular.  And although it is very understated and subtle, much like the Grozet, I can certainly see the appeal. In addition to being golden in color, the beer also has a sweet, honey-like smell and taste, with a touch of peaty flavor, and is one of their lighter beers, weighing in at 5% alc/vol.

Now if you’ll excuse me, I need to go get more Christmas beer. Somehow, my supply became mysteriously depleted… Merry Christmas to all and hope it finds you surrounded by friends, family and plenty of good food and spirits!