Description: Brewed in honor of Spinnaker’s 32nd anniversary, this sour ale is made using backyard quince fruit, which is then fermented with wild yeast strains and aged in tequila barrels.

Tasting Notes: I say this all the time, but this beer is an interesting combination. At first, I was turned off by the label, being somewhat tired by all the sour offerings of late, and not  a huge fan of tequila. And the first sip was heavy on the sour side. However, this beer does grow on you with each successive drink. In the end, what you get is an ale with strong notes of sour lemon, a hint of saison spicy yeast, a hint of dry apple, and some smooth tequila backing. Definitely a gamble that paid off!

Description: A limited release that is brewed for the holidays, the Honey Kolsch is a twist on the popular Cologne-style of ale. In addition to Canadian Pilsner malt and a touch local honey, the end product is lagered, cold fermented, and on the lighter side as far as alcohol content is concerned.

Tasting Notes: While very refreshing, this beer was a little on the light side for my taste. While the honey certainly comes through in the delightful scent, there was little honey flavor to speak of. What’s more, the hop flavor is muted, which leaves the drinker with a malt base that tastes less like champagne (which is what they were going for) and very much like mineral water. A refreshing brew, and well-paired with spicier dishes, but not what I would expect from a holiday beer.

Next up in the weekend from Spinnaker’s lineup, we have the traditional cellar ale known as Jameson’s Scottish Ale. Though it is not a new brew, or particularly summery, it’s been some time since I sampled it last. As such, I could not resist picking it up so I could re-familiarize myself.

And for the most part, I was pleased and not the least bit surprised. But that’s a good thing in this case. For many years now, I’ve known Scottish Ales to be rich, heavy and malty affairs that generally come dry hopped and smack of the peat moss and smoky flavor of Scotch whiskey.

Named in honor of the Jameson clan who settled in Victoria in 1889, and grew rich of the tea, coffee and spice trades, this beer is a nice take on the traditional Scottish ale, being at once malty and complex, but lighter and less sweet than many of its stronger variants. In addition, the dry hop characteristics provide a slight bitterness that helps balance the flavor.

Another September 2011 entry, with a smorg sampler of new beers. No theme, just some new and exciting ones I happened to chance upon, though half were by Victoria’s own Spinnakers brewpub:

Recently, I found a very good Liqour Plus store here in the Saanich area that’s been known to stock up on all my favorites and plenty of ones I haven’t yet tried. So here I am with four more beers!

Tour de Victoria: This is a seasonal ale by Spinnakers, which is known for making damn good beer. The Tour is an especially light feature, brewed to commemorate the real Tour De Victoria. Though technically a session ale it is more reminiscent of a pilsner or lager because of its crispness and light finish. This is apparently because of the use of several different types of wheat malts and European hops. A nice addition to patio weather, and totally non-offensive! 3.75/5

Northwest Ale: Another Spinnakers creation. A dark, tawny ale with a rather light finish. Surprising for a northwest ale, which are usually hoppier and have a stronger, more citrusy profile. However, what it lacks in power it tends to make up for with smoothness and drinkability. Not what I was expecting, but a good fit given Spinnakers many heavier and hoppier numbers. 3.5/5

Starfish Imperial Red Ale: Hoppy, tawny and with a sweet finish, this strong red ale is reminiscent of Doppelbock and a northwest ale. In other words, its sweet and floral, but balances that with a sharp, hoppy aftertaste. Not a bad intro to this Washington brewery, can’t wait to try more! 4/5

Cheval Blanc: Produced by the brewpub of the same name, located in the heart of Montreal, Quebec, this is another signature creation that makes me long for the old days when Quebec beers were so readily available! As far as wheat beers go, this is a fitting addition to my overall list of Quebec beers! Smooth, light on the palate, but with a lingering aftertaste and plenty of citrus notes. 4.5/5 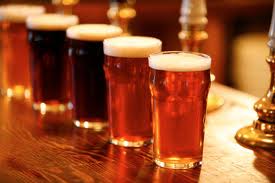 More to follow, at some point I must do a review of Spinnaker’s beers! Good beer, good food, all around good operation. And a chocolatery to boot!