Description:  This latest release from Category 12 is the brewery’s shot at what is currently one of the most popular styles of West Coast ale. It is fashioned using plenty of (what I can only assume are) pale and Crystal malts, then generously hopped with Mt. Hood, Cascade & Centennial hops for an intense flavor – like a good IIPA!

Tasting Notes: Let me just say I’m very proud of C12 and the work they’ve been doing of late. This brew is just one of a few new concoctions they have come up, and intend to review them all. In any case, this beer was a faithful example of a West Coast Imperial IPA, employing a strong, slightly sweet and coarse malt base and an intense hop flavor that has notes of citrus, pine, passion fruit and dried herbs. And yet, despite it power, it manages to finish quite nicely and cleanly. Not what you’d generally expect from a Imperial IPA.

Description: This latest regular release by Red Arrow Brewing was released in collaboration with the Cowichan Bay Rugby Football Team, and named in their honor. A pale ale, this brew consisting of a pale malt base with a medium dosing of West Coast Hops to create a highly drinkable pale ale.

Tasting Notes: I’m quite proud that this operation, which exists just up island from me, has been expanding so nicely. While I’ve generally felt that their beers are a bit on the light side, I’ve enjoyed everything I’ve had from them so far. And this beer is certainly no exception. As pale ales go, its very drinkable, very quaffable, and meets all the must-haves of a good West Coast pale. This includes a good malt base accentuated by piney, citrusy and bitter hops, and a nice clean finish.

Description: This beer made its debut during the Great Canadian Beer Festival, and is now available as a limited release. As the name suggests, the beer employs three special ingredients, which include hemp, hibiscus and honey.

Tasting Notes: This brew was perhaps a bit light for my taste. With ingredients like hibiscus, hemp and honey, I was expecting a bit of a more robust flavor. Still, the beer it does come through in the refreshing and clean tasting departments. A smooth malt base is nicely accented by fruity esters, nuts and some herbal, citrus notes. 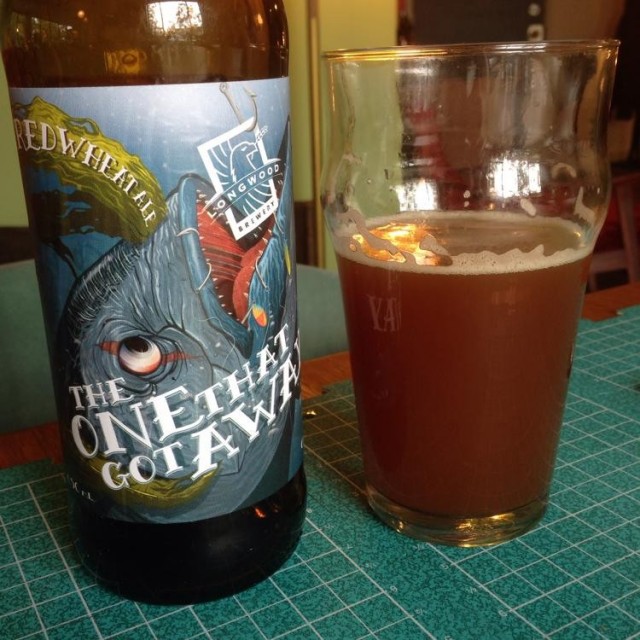 Description: Inspired BC Tough’s annual West Coast Tuna Shootout, a fishing derby that takes place in the wild waters off Bamfield, BC, this wheat ale is crafted using 50% Wheat and a healthy dose of Crystal Malt. The end result is a copper colored, unfiltered ale that is cloudy, malty, and effervescent.

Tasting Notes: Last summer, I had my first sampling of this beer and was not very pleased. I chose to not to review it that time, thinking it might be a bad bottle. However, a subsequent tasting confirmed that the beer was in fact quite coarse and somewhat metallic-tasting. However, this latest batch, recently released with a new bottle (as you can see from the picture above) was surprisingly better. While it still has that characteristic, slightly bitter tang to it, this is nicely balanced amidst flavors of yeast, some tart fruit esters, and a bubbly character. I am therefore upgrading this beer a full point!

Hello all and welcome to another two-fer. Today, as I get ready to head back to the Sunshine Coast Trail with my darling wife, I am reviewing two beers that are both of the Maibock variety. Ever since I tried my first, which was Holstein’s own, I was a fan of the seasonal beer that combines slightly sweet, heavier malts and sugars with mild hops and a generally refreshing quality. And in addition to including a beer that I’ve been meaning to review for some time, I managed to grab a new and surprising limited release. Here’s what they were and what I had to say about them…

At long last, I’m getting around to giving this beer its due with a fitting review. I believe I’ve sampled this beer three times at this point, and enjoyed it every time, but never had I been able to take down its particulars and give it the four point assessment. And I’ve been meaning to, since I was quite impressed with it the first time and have remained so since.

Much like all of Lighthouse’s limited releases, this beer has legs and some genuine signs of craftbrewing quality. And like a good Maibock, its got a good balance of sweet malts, mild tang, light hops, and a good long, semi-bitter finish. It also boasts an interesting balance of fruit and honey, both in terms of scent and taste. And all of this rounds out quite nicely in the finish, which is long but ultimately refreshing.

The second sample comes from one of my favorite local operations. Moon Under Water began as a purveyor of sessional ales, but then switched over to a more diverse and challenging array of beers shortly thereafter. And I’ve had nothing but good things to say about their old and new lineup. And now that they are creating seasonal and limited release beers, I’d say the circle is now complete. And how fitting that the first of these be a Maibock, a venerable brew that’s in time for summer?

And overall, I was quite pleased. Thought this one leaned towards the lighter end of things, in all departments, it remained a balanced and appealing example of a Maibock. And I was quite impressed that the Moon Under Water brewery has branched out to seasonal releases so soon after releasing an entirely new lineup, which already consisted of four really good beers! So really not a bad start to an expanded repertoire, and I look forward to their next one.

Hello folks. Today, I managed to snag another brew from one of my favorite Island operations, and one which has been undergoing a bit of rebranding as of late. I refer of course to the Longwood Brewery located in Nanaimo, BC, a venerable brewpub that has been expanding its distribution in the past year and creating some new brands to share. I was quite excited to hear about this, since its damn near impossible to find any Longwood products outside of the Nanaimo area.

However, that excitement has since abated somewhat due to a number of reasons. For one, I still await the arrival of the free samples of the full lineup that were promised to me months ago. Back then, I was contacted by an advertiser who works with the brewery who offered to ship me some; and to this date, none have arrived. Second, thus far, the majority of their beers I have managed to get my hands on have been very light, mild, and generally in tune with British-style ales and not so much the Pacific Northwest.

Here on the West Coast, we tend to like our beers hoppier, stronger and more flavorful than your average British operation. I can certainly see the value in trying new things, but I would like to remind Longwood that Moon Under Water did the same thing with their sessionals, and that didn’t go so well. However, this does not meant that I’ve been unimpressed with their newer brews, and the lineup is still evolving, so its really too soon to assume what direction the brewery is taking. And with this latest sample, I am just one beer short of having tried everything they’ve produced so far. Here’s what I thought:

Overall, it was a refreshing and fruity brew, but again, a little light for my taste. This is due to the combination of wheat and barley malts, which lends it a mixed malty profile that is neither particularly effervescent, yeasty, or syrupy. This certainly works in the refreshing department, but leaves it a little high and dry in the flavor department. In terms of fruit, there’s plenty of tartness, but very little sweetness or complexity. In short, it’s good, but I think they can do better.

Due to the sheer volume of good beer and great limited releases they’ve produced over the years, I think it’s safe to say that Driftwood has become one of my favorite breweries of all time. In addition to their Fat Tug IPA, Naughty Hildegarde, Twenty Pounder IPA, and many Flanders-style sour ales (the epitome of brewing perfection!), they’ve also been known to produce some excellent Belgian-style ales as well.

The lastest is known as The Heretic, a Belgian-style Tripel that is the second in a series made using locally grown, Saanich peninsula barley. And since the last one was a Dubbel (the Clodhopper), it only made sense to up the ante with this one! In addition, Heretic is brewed using candy sugar, a tradition that is employed in several strong Belgian ales to increase their alcohol content, the most renowned being Duvel. The end result is a beer that is light in color, heavy on alcohol (8% alc/vol), and boasts some strong, coarse, and spicy malts with an infusion of herbal hops. And I can honestly say, as a man who’s not normally a fan of this type of beer, that this one was most inoffensive and actually quite appealing.

In truth, and with all due respect to the venerable brewery, Duvel was never a favorite of mine. In fact, I’ve never been much of a fan of the particular style of Belgian strong ale that involves added sugar. Though I am a big fan of powerful ale, somehow, beers made in this fashion always seemed too light and too coarse for me. And yet, this Driftwood product managed to not only nail the recipe but still remain appealing to my palate. Good job, guys! Looking forward to the next limited release!